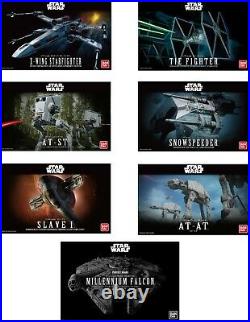 BANDAI REVELL Star Wars model Kits. Use the drop down menu to select your kit. More information about the kits below. The X-Wing is a versatile Rebel Alliance starfighter that combines speed and firepower. Armed with four laser cannons and two proton torpedoes, the X-wing can take on anything the empire can throw at it. Highly detailed down to the smallest detail. Display stand allows adjustment of the attack on the Death Star. Two decal options included (stickers or decals). The TIE Fighter was the unforgettable symbol of the Imperial fleet. The TIE fighters stationed aboard star destroyers battle stations were single-seater ships designed for rapid aerial combat with X-wings and other star fighters. Effect clear parts for laser beams contain. Although the AT-ST is not as imposing as its larger cousin the AT-AT runner, it served as an important complement to the Imperial forces on the battlefields of the Galactic Civil War. The two-man vehicle is lightly armed with chin laser cannons and side-mounted weapon carriers. Cockpit hatches open or closed. Effect clear parts for blaster contain.

When the Rebel Alliance was stationed on Hoth, it modified T-47 air gliders into snow gliders, and thus too fast flying means of transport for patrols and to defend its hidden base. The snow glider is a small, wedge-shaped flying device with laser cannons pointing forward. Effect clear parts for laser beams included. Two seated pilot figures included.

The deadly Slave I was notorious for her pilot Jango Fett, a bounty hunter in Mandalorian armor. From laser cannons and projectile launchers to seismic bombs.

With a height of over 20 meters and impenetrable armor, these massive structures create a psychological effect as well as a tactical advantage. Highly detailed to the smallest detail. Replica of legs and joints.

The kit is based on thorough research on the 1.7m studio model and knows no compromises in terms of model fidelity and detailing. Ultra-detailed down to the smallest detail. LED unit for illumination of engines, landing gear, cockpit and loading ramp. Sitting figures of Han, Luke, Leia, Chewbacka, Obi-Wan and C-3PO. This service will be delivered by your postman.

Delays to receiving your item can be caused by your Postman being unable to deliver your item as it is to big to fit through your letter box. Please make sure your address is full and correct at the time of ordering. Unfortunately sometimes items are delayed and once they have left us these are beyond our control, however we will try our very best to help and assist you. Unprecedented times this item could be sent from our Main business address or our Head office, which are both located within 6 miles of each other in North Cornwall.